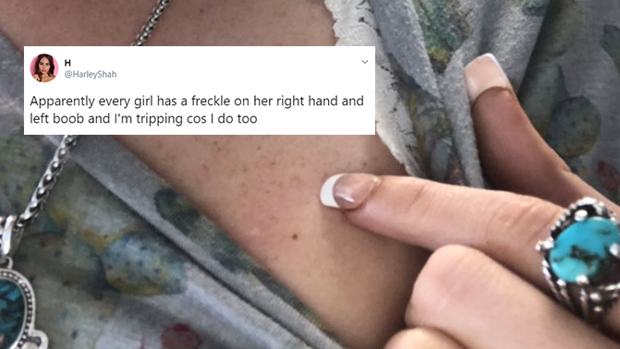 Last week every woman on the internet was finding out they had a freckle in a particular spot on their wrist, and now it's time to check ya boobs!

Taking to Twitter, user Hayleigh posted a tweet asking if anyone else had a freckle in the same spot of their boob- and the response was incredible!

OKAY LADIES...WHO ELSE HAS A FRECKLE/MOLE ON THE TOP OF THEIR LEFT BOOB OR IS IT JUST ME?!?!?! pic.twitter.com/cLoPwigN8q

And then came the influx of other women around the world with the same freckle!

Same!! I’m pretty freckled already but I do have a dark one on top of my left boob! pic.twitter.com/j6KLY5YoQO

saw a pic that said every girl has a freckle on their right hand/left boob n i said BS then checked and i, in fact, have those freckles....

This comes after every girl on the internet checked her wrists for a freckle that apparently everyone has!

I have the Big Dipper! ...also, why tf am I looking down my shirt at work to check for boob freckles? Smh internet 🙄 pic.twitter.com/WyakobRnIt

Is this a coincidence or some sort of female conspiracy theory?!