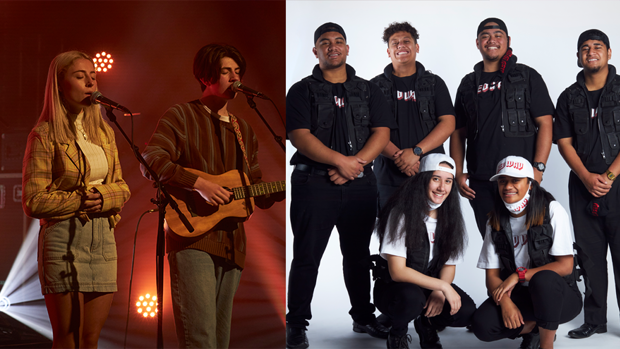 Smokefree Rockquest was a little different this year, but that didn't stop some amazing artists from being crowned!

Check out the winners below:

The winner of the Solo/Duo Category went to siblings ‘Ben and Brody’ (Ben and Brody Glanfield) from Rangitoto College in Auckland, winning $3,000 of musical equipment from the Rockshop, a $10,000 NZ On Air New Music Single Grant Recording and Video Grant, a branding package from Imaginary Friends, and mentoring and on-going support from the Smokefreerockquest team.

Brody says that the duo have bonded strongly over music, saying “for us music is a passion. When we work together everything comes easy.”

About solo/duo winners Ben and Brody, Ross Flahive said they “are the whole package, and something we haven't seen yet from another New Zealand act yet. Their songs are well structured with catchy hooks, nice harmonies and well thought out lyrics. Their performance reflects an act that is ready to go."

Red Wav from Aorere College and Marcellin College in Auckland have just been crowned the winners of the Smokefreerockquest National Final, taking them one step closer on the path to musical success. This year’s event was streamed live as an online showcase.

As Smokefreerockquest band winners, Red Wav receives $10,000 in musical equipment from the Rockshop, plus a $10,000 NZ On Air New Music Single Grant Recording and Video Grant, a branding package from Imaginary Friends, and promotion, mentoring and on-going support from the Smokefreerockquest team.

Congratulations to everyone who entered Smokefree Rockquest, you were epic! See ya next year...