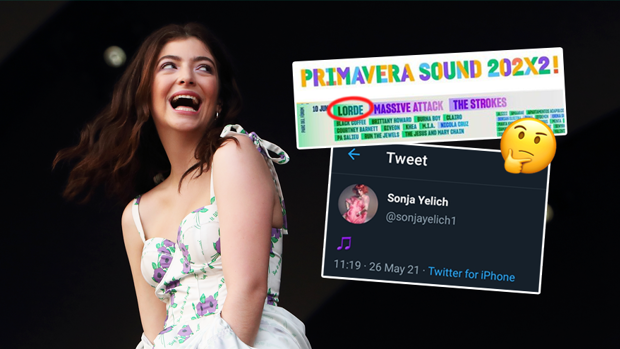 Fans have been eagerly awaiting the green light for new music from Lorde and there's a big clue that suggests the wait is nearly over.

Now she has made headlines once again because fans are convinced she will return with a new album sooner than we think. The singer has booked a slot at Barcelona's Primavera Festival in June 2022, potentially signaling she is about to release new music and will head out on tour.

And the website for the festival has fuelled more speculation, "Lorde, who will emerge from her retirement with her third album after her unforgettable visit in 2018."

On social media, her followers have gone wild about the possibility of new music.

mentally preparing myself for new music from lorde pic.twitter.com/X7NX2wUnlu

📲 After Lorde was announced as a headliner at Primavera Sound 2022, a sudden surge in searches for "flights to Spain" was recorded on Google. pic.twitter.com/Grdsg3WJoH

And to add more fuel to the rumors, in a now-deleted tweet, Lorde's mum Sonja tweeted a less-than-cryptic emoji of a musical note on the same day as the festival announcement...

I saw a few people saying they saw Lorde’s Mum Sonja do a quick tweet-and-delete. I can confirm YES she really did, here’s it is from the cache that’s still showing up on my phone. A single emoji, but the most exciting one pic.twitter.com/ziwAbBApm3

The Grammy-winning musician has all but confirmed her album will be released in 2021.

A year ago, she confirmed she has teamed up again with Melodrama collaborator Jack Antonoff in an email newsletter to fans. But the pandemic delayed the record's creation.

"A thing started to take shape. And then, of course, the world shut down... I want nothing more than to feed you treats, pop perfect morsels straight into your little mouths. In my opinion, the greatest treat I can give you is work that will last ten, twenty, thirty years. And that kind of work takes time."

She also locked in the album title after a trip to Antarctica, saying in the same e-mail, "I actually decided on the album name right around that trip."

Fingers (and toes) crossed that she makes an announcement of some kind asap!

me 20 years from now still holding on hope that lorde will release the third album pic.twitter.com/4ct7JrsnfX