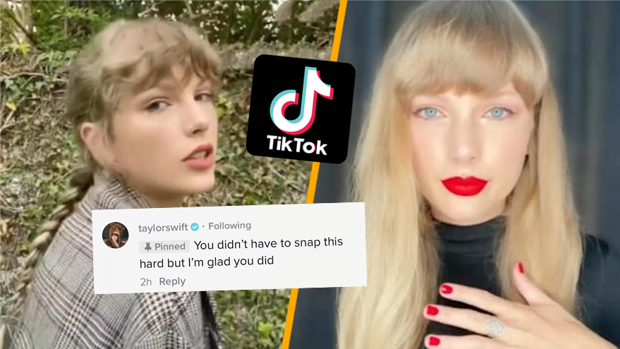 Where are all our fellow Swifties at?!

Our girl Taylor has finally made the big move and posted her first TikTok video! Or as she calls it, "SwiftTok".

In her debut video, Taylor is lip-syncing to a song by UK rapper Dave, which named drops the 31-year-old pop star.

However, T-Swizzle did take the opportunity to remind us that she has "lots going on at the moment" and naturally used her first video to plug the presales of "her version" of the iconic Red vinyl.

Lots going on at the moment: Red (my version) vinyl is up for presale on my site and oh I’m on tiktok now let the games begin 😺 ##SwiftTok

In just 8 hours, Taylor's account has already amassed 900K followers, while her video has been viewed over 4.5 million times. No doubt she'll be one of the fastest accounts to ever reach that 1 milli mark!

And as you can imagine, social media really has been popping off to the news of more behind-the-scenes content of Taylor.

today on things i wasn't expecting from taylor swift pic.twitter.com/h5DCLzAG8V

She's also been replying to fans welcoming her to the platform. Seems like Taylurking is back once more!

📲 | Taylor Swift replied to this duet on TikTok — “You didn’t have to snap this hard but I’m glad you did” #SwiftTok https://t.co/wKpuu8v6n0 pic.twitter.com/V1kDe4Z4SQ

It seems nobody has any idea of what Taylor plans to release on the app, but her bio states, “This is pretty much just a cat account.” and we love cats (and her) so we STAN!