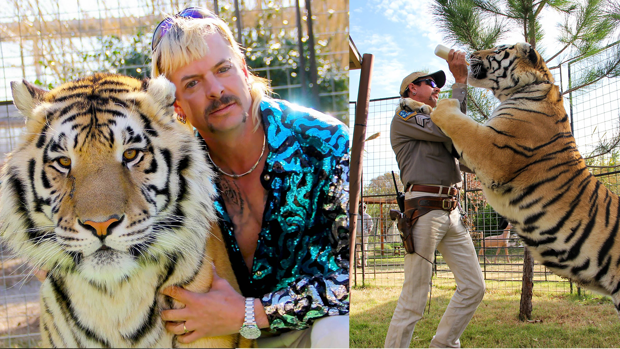 *Will contain spoilers for Tiger King on Netflix*

Tiger King has taken over the internet since it's pretty much the only thing people are watching in isolation.

But what do the stars of the docuseries actually think about their Netflix debut? (spoiler, they're not happy).

He's still in prison – and he'll likely be there a while yet.

Joe Exotic – real name Joseph Maldonado-Passage – was sentenced to 22 years in jail in January for his role in the Carole Baskin murder-for-hire plot.

But Joe is fighting it of course: filing a US federal lawsuit seeking nearly US$94 million in damages! He claims he was convicted based on false testimony. He also says he was singled out for being "an openly gay male with the largest collection of generic tigers and crossbreeds".

But since Tiger King exploded on the internet, he has gained some very famous supporters incuding rapper Cardi B! She's even said she will start a GoFundMe to cover legal costs!

Baskin says she took part in Tiger King because she was promised it would shine a light on the exploitation of wild animals in "backyard zoos" across America. But that sort of backfired, since it has now put more of a spotlight on the death of her husband...

Writing on the website of her Big Cat Rescue sanctuary, Baskin says:

"There are not words for how disappointing it is to see that the series not only does not do any of that, but has had the sole goal of being as salacious and sensational as possible to draw viewers,"

"As part of that, it has a segment devoted to suggesting, with lies and innuendos from people who are not credible, that I had a role in the disappearance of my husband Don in 1997."

Big Cat Rescue is still open. And there may be new tips on the investigation of her husbands disappearance/death...

Or as he is also known, Mahamayavi Bhagavan "Doc" Antle.  The Institute of Greatly Endangered and Rare Species (that's TIGERS for short) is still being run by Antle and like the rest of the cast, he's not happy.

"This is not a documentary. This is a salacious, outrageous ride through a television show produced to create drama, to just tie you in to some crazy train wreck of a story between the feud of Carole Baskin and Joe Exotic," Antle said in an interview with TMX News.

Similar to Carole, Doc thought the doco was going to about the positive things he does for animals, and his efforts to protect. (Not that he allegedly got rid of tiger cubs when he no longer needed them...)

Britney Spears before the VMAs.

"Questions about Carole and Joe were a dozen or so thrown into hundreds of others. And I repeatedly told them, I have no desire to be involved in some show where you got the feud of Carole and Joe going on. It's not my thing," he said. "Leave me out of it."

It was also recently discovered that Doc played a role in a Britney Spears vid! See pic above.

Oklahoma Zoo, which is what Lowe renamed the park after he moved in on Joe Exotic's zoo, behind Winstar Casino, is billed as "opening summer 2020."

The negativity after the show hasn't been great for the re-opening, but Lowe seems less than phased, posting a selfie five days ago as Lowe was "on the way to the vet."

"They touched on about 10 per cent of the story and, you know, the portrayal of us stealing the zoo from Joe was very unfair because we came here to help him, we got it back on its feet," he told TMX News.

One of the few people you might actually like, Joe's first husband John is pretty memorable, with his toothless smile and shirt-free interviews.

TMZ reports that our guy Finlay now has a brand new set of pearly whites! (Pictured below).

He's also not too happy with the people behind the show, who he says told him to be shirtless in interviews! He also want's the world to know that his missing teeth aren't from his meth use but more a genetic trait problem...

He now lives in Oklahoma with his fiance Stormey from the final episode, where he got THAT tattoo removed. As explained on the show, like Joe Exotic's other husband Travis, he was never actually gay.