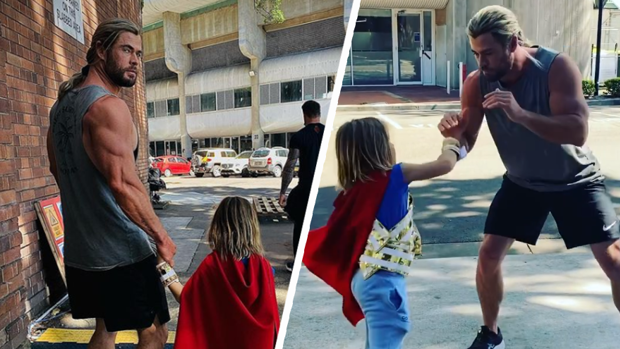 *The below pictures could cause swooning and potential loss of breath. ZM do not take responsibility for excessive thirst caused*

Chris Hemsworth has taken to social media to share his 7-year-old son's hilarious response to the age old question, "what do you want to be when you grow up?".

Wearing the iconic red cape, Mini-Hemsworth responded with “Dad I wanna be Superman” obviously not realising exactly who his dad is... Awkward!

Hemsworth is currently filming the fourth instalment of the Thor franchise in Australia, titled 'Thor: Love and Thunder' directed by Taika Waititi.

But yes, let's discuss what else is in the photo... Chris's arm is almost the same size as his young child! Yes please!

No stranger to the workout pic on his Instagram, Hemsworth loves a plug for his fitness app called 'Centr' which boasts an array of fitness and health tips.

To be honest, we really aren't mad about that and really hope he continues, so thanks Chris!